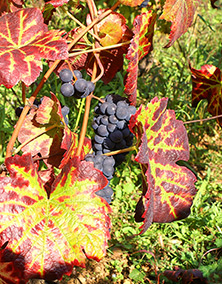 For travellers coming from Dijon, Gevrey-Chambertin is where Burgundy's Elysian Fields begin. At the entrance to the hollowed hill of Lavaux, a château - once a property of the monks of Cluny - resembles a fortified wine-cellar. The canons of Langres, too, were for a long time guardians of these vineyards which can be dated back to the year 640 AD, evidence of a long and intimate involvement in the history of Burgundy's wine industry. Gevrey-Chambertin forms a kind of guard of honour to a set of fabulous Grands Crus whose crown jewels are Chambertin and Clos de Bèze. The appellation dates from September 1936. The village of Brochon is an extension of Gevrey-Chambertin, sharing the same characteristics. The Pinot Noir is at its peak performance here.

The Premiers Crus occupy the upper portion of the Côte at heights of between 280 and 380 metres (brown limestone soils, rather shallow). Below are the Village appellation vines on brown calcic or limey soils. The vines also reap the benefit of marls covered with screes and red silt washed down from the plateau. These stony mixtures confer elegance and delicacy on the wine while the clayey marls, which contain rich deposits of fossil shell-fish, add body and firmness. Exposures vary from east to south-east.

In the first flush of youth their colour is a bright ruby, turning to deep carmine or dark cerise with age. Strawberry, mulberry, violet, mignonette, and rose all help to make up their bouquet of spontaneous aromas. More maturity brings out liquorice, leather and fur, with gamey notes and hints of underbrush. On the palate, they impress by their firm structure, velvety tannins and delicate texture. These wines are everything a great burgundy should be : full-bodied, powerful, rich, and meaty. They have both body and spirit. Pleasant when drunk young « on the fruit », they are nevertheless first and foremost wines for aging, often for long periods. As such, they make an excellent basis for comparing different vintages.

Massive, yet velvet-smooth, the tannins of Gevrey-Chambertin confer power and solidity to the build and contribute to its great longevity. This is a wine for meat-eaters, its gamey notes giving it a particular affinity for game, whether furred or feathered, especially when the wine is more fully evolved. It also goes superbly with rib steak, lamb (braised or in brown sauce), and all musky, solidly fibrous meats, that need time in the mouth to extract all their savour. Some gourmets will even serve it with a fillet of pikeperch or tuna in red-wine sauce. It is at ease with all strong cow-milk cheeses, in particular Époisses, Ami du Chambertin (a local specialty) or Cîteaux (a near neighbour). Serving temperature : 15 to 16 °C.

Our parcels in Gevrey-Chambertin 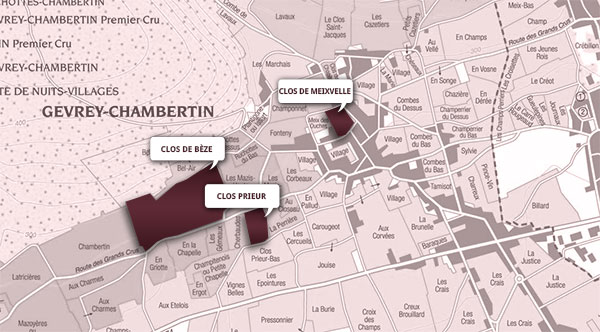